Ubuntu is a complex word found in numerous Nguni Bantu languages which can have diverse meanings. It can be used to describe a person’s relations with other people, as in behaving in a kind and humane way towards others and showing compassion in any situation because of a sense of common humanity that connects all people on earth. It can be used to describe selfless acts and simple gestures of kindness, like smiles from strangers, unexpected insightful conversations, or even a brief acknowledgement of someone else’s presence.

I think we often underestimate how such little things can brighten up your day, and in South Africa I realized just how ingrained Ubuntu is in society despite the bitter lingering Apartheid aftertaste. In fact, Ubuntu was an integral philosophy at the end of Apartheid, when Nelson Mandela and Archbishop Desmond Tutu stressed the need for forgiveness and reconciliation rather than revenge to move away from the divisions of Apartheid to a more integrated nation. Whilst structural injustice and inequality remains an uncomfortable part of South Africa’s reality, I was glad to see several instances of Ubuntu which gave me hope that things may change for the better. 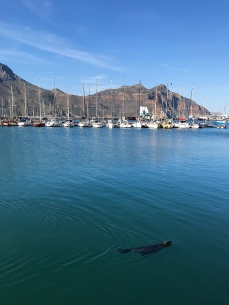 Despite South Africa’s sad Apartheid past, which divided its inhabitants according to their physical looks, I felt Ubuntu as soon as I arrived. As I walked through the plane corridor I looked outside at the airport workers dressed in bright fluorescent orange jackets. Usually you would see them talking to each other and making their way towards the aircraft, but in Cape Town they looked up at the travelers, making eye contact, smiling, and waving, welcoming fellow Capetonians back home and making visitors feel welcome. It was a small gesture of attention which showed a generous human kindness I would experience when interacting with locals throughout my stay. The workers did not personally know who they were waving to, but did it anyway to make people feel respected, something the passengers especially appreciated after having flown for twelve consecutive hours. No matter how tired the passengers were, this attitude put a smile on everyone’s faces, including the sleep-deprived family with two newborn children which had screamed to the top of their lungs ceaselessly, and the grumpy looking old professor who complained about how sitting down for so long was terrible for his joints. 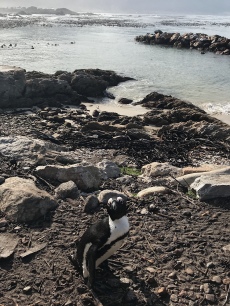 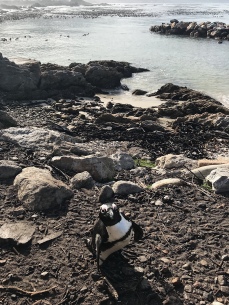 It was only a few minutes before I encountered another case of Ubuntu, this time in the unlikely setting of an airport toilet. A cleaner was mopping the floors as I walked in, and she enthusiastically smiled at me, beckoning me to choose a cubicle. “Welcome to my office, I hope you have a pleasant experience!” she exclaimed joyfully, sweeping her arms widely across the restroom like she was showing me a palace. She knew I would find this small remark amusing and chuckled when I grinned.

The art vendors who urged us to buy their paintings at the seafront were not angry when we did not purchase any of their products because we talked to them anyway. They wanted to learn more about who we were, and why we had ended up in the most southern point of the African continent, and how things were different back in Europe. We seemed to share an unspoken understanding with them that the words, attitude, and looks we exchanged mattered more than the things we could have bought. Some even outright thanked us for simply talking to them as though they were human instead of dismissing them as beggars who wanted money from tourists. 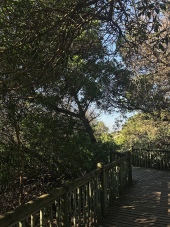 But I also experienced another kind of Ubuntu in South Africa, one not solely reserved to humans. I realized that you could share a sense of Ubuntu with animals as well, treating them with respect and kindness rather than exhibits. 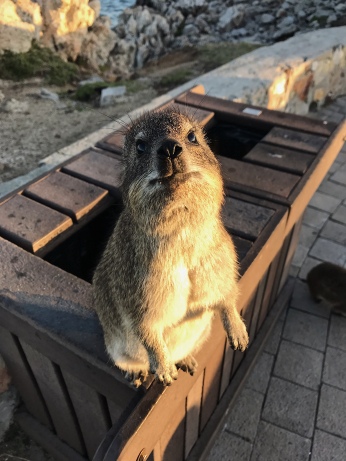 One day we met the Dassie Whisperer, an old man who fed the dassies carrots every day. We found him surrounded by more than thirty fluffy rodent-like creatures fighting for his attention. He seemed to know the habits and behaviors of each individual dassie and made sure each got some food. Whilst the tourists were wary of coming close to these animals and speedily took several steps back if even one dassie showed interest in these newcomers, the Dassie Whisperer fearlessly patted his small friends on their heads. He was relaxed, and so were they, so they had no reason to bite him. 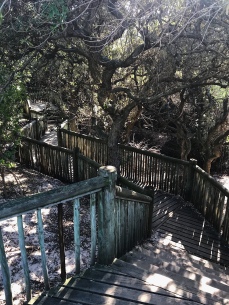 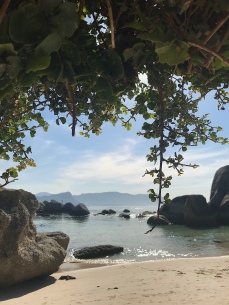 Another time I saw such mutual exchange of kindness was in Simon’s Bay harbor, where I met a man whose best friend was Puppi, a seal he had saved from a boat propeller and raised as part of his family. He could predict Puppi’s actions to the second, and they communicated with nods and grumbles. 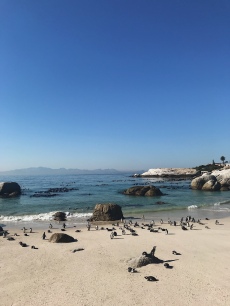 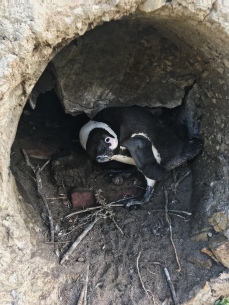 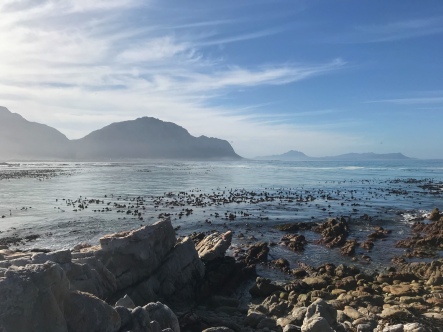 Then there was my encounter with the lone giraffe. There was a whole tower of giraffes who seemed uninterested in the food we were offering, no matter how long we waited. But when we made our way to the one which was secluded from the others, he guardedly strode towards us and accepted our offerings. We soon realized he was a gentle creature who simply wanted to play and have his horns scratched, and that he was very grateful that we spent time with him – he even smiled. 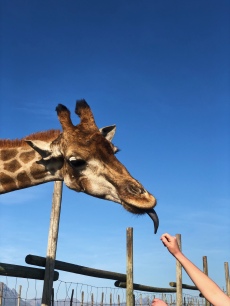 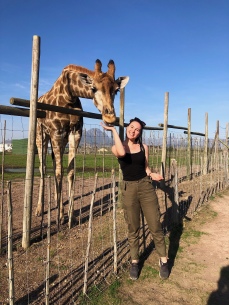 It was at the beach with the penguin colony that I realized that in the animal kingdom, it really did not matter whether you were black or white. There are ranks of predators and prey, the dominant and the passive, but no tangible discrimination based on physical attributes. Humans created unnecessary divisions between races, forgetting that at the core we are the same species. 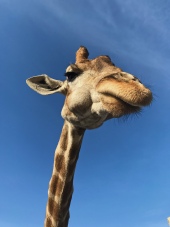 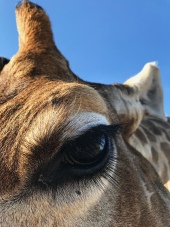 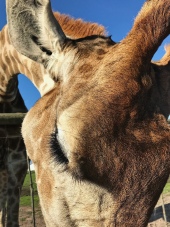 Being humane need not be reserved to humanity, and Ubuntu can be extended to other living beings as well. Indeed, I feel we can learn the warmth and respect that comes with Ubuntu from animals which, unlike us, do not need to be reminded that all living beings on this planet are connected to each other in one way or another. 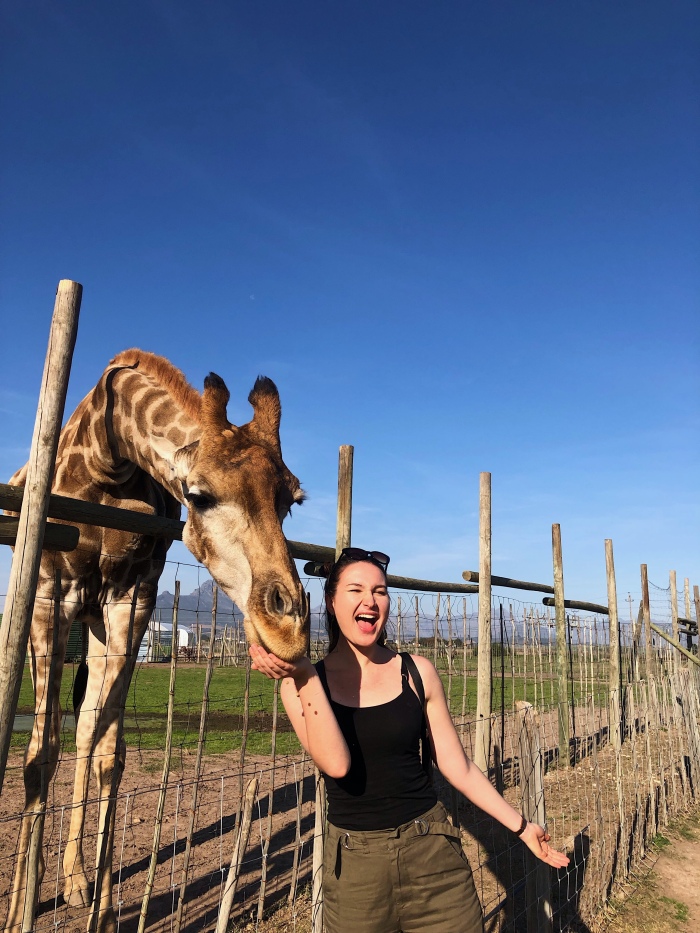