Even though it was April, the sun’s glares made it seem like we had stepped into the height of summer, when the green grass turns to arid, dusty patches of straw and when most people’s activity is limited to lazing about on stretched out towels.

After what had seemed like hours, we finally stumbled on a fence which was barely visible behind a bunch of prickly bushes with yellow flowers. We followed the fence to a place where the bushes parted, revealing to us a locked, rusty gateway you would never notice from the main path.

Although the pergola was a place usually crawling with visitors who came to marvel at its intricate gateways and well-kept gardens, there was not a soul in sight. It did not look eerie in the slightest, maybe because it was sunny, or because it was afternoon, or because there were three of us. It looked inviting to a point where we began to search for an entrance amidst the thorns. Perhaps there was a spot where the fence was bent, or broken, or a small side path we could squeeze through.

No luck. The seemingly inviting pergola had transformed into an unbreakable fortress in a matter of moments. If we wanted to get in, we would need to climb the fence. One by one, we hoisted ourselves up to a point, jamming one leg in between the railings, and swinging the other over, and then jumping off onto the other side.

As soon as we were inside these closed-down grounds, we had entered another world. A calmer, slower, more serene realm which lulled us into a poised state of quietude. The flowers bloomed in a different manner here, more gradually, as though they knew they had all the time in the world to do so. 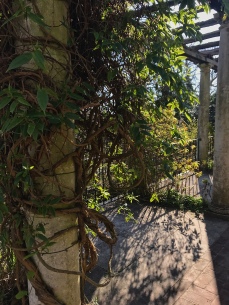 A shaded passageway led us to a deserted pond of a deep, mystical turquoise colour. It was placid until I took a reed from the bank and stirred the water a little, whirling mud, sand, and autumn leaves together in a swirl which resembled the way cold milk clouds up coffee.  There was a whole world under the surface, teeming with miniscule tadpoles, water bugs, and weeds.

Each of us went our separate ways, exploring nooks and corners which drew our attention. We were lost not in our own thoughts, but in this tranquil place we had discovered in the midst of an ordinary park. Time stopped, if only for a moment, until someone noticed the fluorescent yellow vest of a caretaker, which signalled to us that it was time to return back to reality. We gathered our belongings as quickly and quietly as we could, scrambling back up and over the fence. 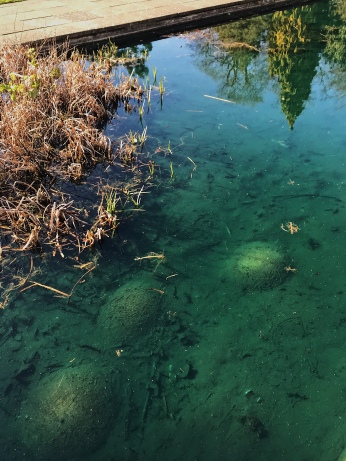 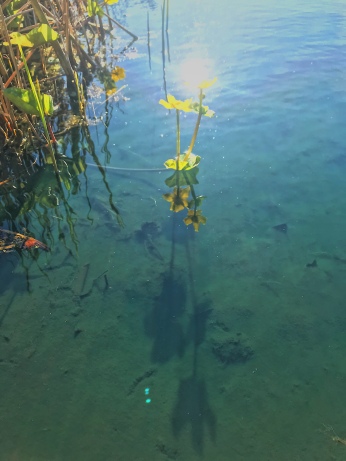 In some ways, the pergola was an escape from the usual bustle of city life. In others, it was a hushed encounter with another dimension, which exists alongside the one we ordinarily inhabit.